Promoting the “Chiran Tea” Brand in Japan and Overseas

Minami-Kyushu City will host the 74th All Japan Tea Festival—Kagoshima in 2020. During the convention, all actors of the tea industry pledged to be united to make the Festival a success, viewing it as a grand opportunity to advertise the Chiran Tea brand in Japan as well as overseas.

About 270 people attended, including tea producers, city officials, and JA members. Representing the younger generation of growers, Kazuhiro Nagayama (Ei) and Takeshi Miyahara (Chiran) shared three slogans: 1. Advertise Chiran as being the nation’s largest producer of tea and how good its tea is. 2. Advertise how young producers and women take an active and joyful part in Chiran’s tea industry. 3. Advertise to the world the attractive Chiran brand.

During the commendation ceremony, meritorious individuals who have for many years contributed for the establishment of the brand and the development of the industry were honored along with superior award winners of various tea fairs.

By municipality, Minam-Kyushu City is the nation’s largest tea producer as its tea growing area covers 3,426 ha (13.23 square miles) and produced 12,905 metric tons (an increase of 1,079 metric tons from the previous year) of crude tea in 2017. In April 2017, we unified three separate brands used in the city into a single “Chiran Tea” brand to secure and increase the lots, advertise with the logo mark, and to fortify our brand power and sales force.

The association president Masayoshi Goto explained: “In 2016, we invited the Festival. We advertised the following: 1. Chiran’s perfect locational conditions make it possible to use large machinery in the production stages to facilitate safety and security in producing quality tea. 2. Many young producers work in the industry to export tea, raise organic tea, and grow a variety of teas to meet the needs of the times.” 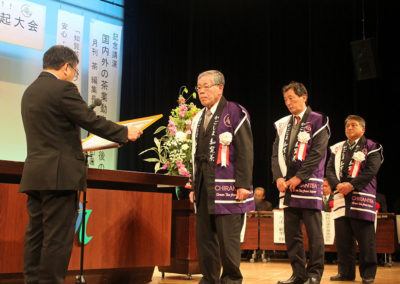 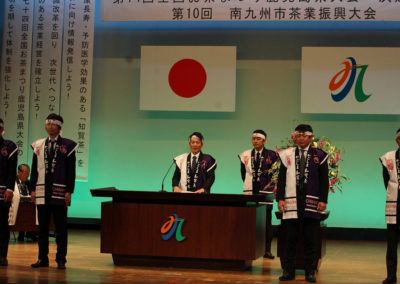 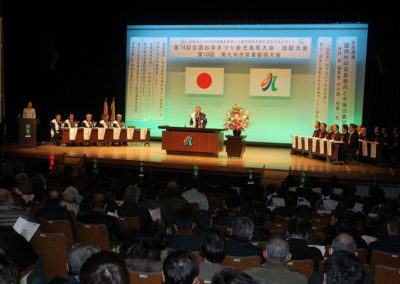